The New Work, "Evening at Galena" 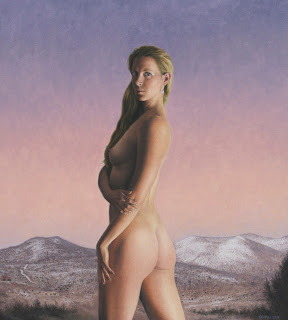 One of my very few nocturnal pieces.  In the clear winter evening, just before dusk, I was able to capture this colorful sunset moment in the sky.  The model was posed in my studio about the same time, but with a different lighting setup.
Posted by Seidai Tamura at 4:31 PM No comments: 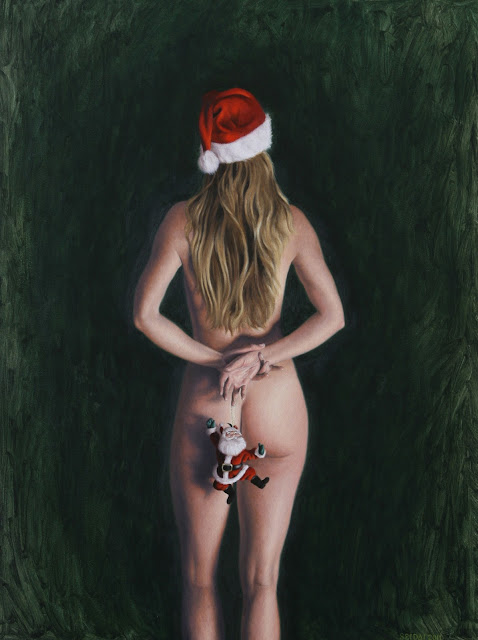 Here is something for the Holiday season: a simple composition/pose, but I really love how it turned out.

The piece was entirely produced using photo reference. I feel like I stepped into the "dark side", like Anakin Skywalker, but I really enjoyed working on it regardless.

Have a happy holiday season!
Posted by Seidai Tamura at 9:34 PM No comments:

Here are some plein air field study works. I’m doing a series of sunset studies for my next piece, like the “Bartley Ranch Sunset” piece.
Posted by Seidai Tamura at 8:17 PM No comments: 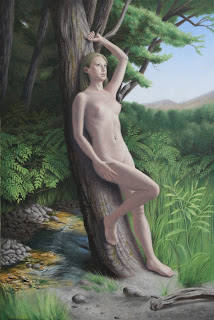 Oil on linen canvas, 24”x 16”.
Summer was finally here in northern Nevada, (I’m recalling back in June, when I first started this project.) and I wanted to create a piece celebrating the gorgeous summer days.  It quickly became a rocky, troublesome project.
The first sign of trouble was the model I was working with who about half way through the project suddenly became unavailable.  I had finished the under painting process at that point, and also had a finished drawing and a couple of small color studies of the subject in hand, so I was pretty confident that I could finish the piece without her.  As I proceeded without the model, it became more and more apparent that the piece wasn’t working, and I wasn’t happy with it.  Although it was my great regret to abandon the piece, it was clear that there was no point in pressing on.
I ordered a new canvas, stretched it, and started a new piece from scratch, with the exact same pose, and setting, trying not to make the same mistake. I put the abandoned piece right next to it.  Although the new piece had the same composition and pose, I didn’t try to do a faithful portrait of the subject this time.  I made up an entirely new subject from my imagination.  However, since the pose and lighting set up were the same, I could still follow the rules of light and form to render realism.
The piece was produced entirely from life and my imagination.  The background scenery was the combination of two locations: Evans Creek at San Raphael Park, and Carson River Park.  The total number of hours spent at the studio: 103 hours.  The total number of hours spent for field studies for the background: 16 hours.
If you are interested in seeing the process shots, please go to  http://www.flickr.com/photos/43078252@N04/sets/72157627763330791/
Posted by Seidai Tamura at 4:54 PM No comments: 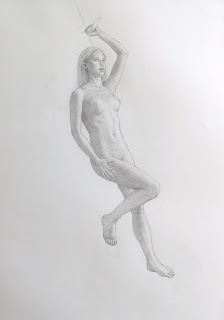 I have revised a preliminary drawing for a new piece.  There are a couple of reasons.  I wasn't quite happy with the previous one, and also the model I've been working with unexpectedly left our project.  I didn't hire a new model, but completed a new drawing based on the previous one.  I also have changed my mind about the final dimension of the piece.  It will be 24"x16".
Posted by Seidai Tamura at 9:29 PM No comments:

Preliminary Drawing for a New Piece 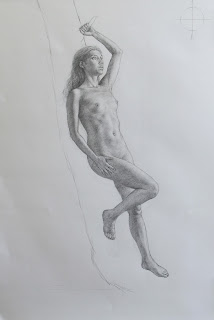 The New Work, "Flower by the Lake"

My initial plan was to place her in the midst of a forest, surrounded by cheerful, spring flowers, but the signs of spring were yet to be seen here in Northern Nevada. I quickly changed my plan and decided to place her by the beautiful Lake Tahoe shore. The location doesn't really exist. The background scenery was loosely based on a typical Lake Tahoe scene and the sketches I made a couple of years ago.

The new model Flora (an alias used at the request of the model) was pleasant to work with. Although I only had the opportunity to work a total of 9 sessions (4 hours per session) with her, I was able to finish the drawing and the under-painting of the whole figure completely from life. After the 9 sessions, I worked from the reference photos of her in order to finish the painting. The total number of hours spent for the piece: 99 hours.